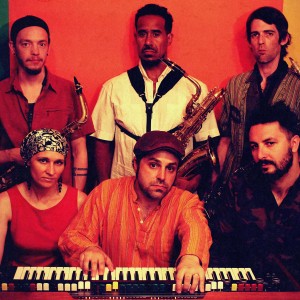 Canada’s powerhouse Afro / Latin / Tropical collective, The Souljazz Orchestra, surface with a hard-hitting new album Resistance for Autumn 2015. In keeping with the band’s previous work, the Orchestra keeps powerful lyrics at the heart of their music, delivering some biting social commentaries alongside messages of hope.

Having already shared the video for “Shock And Awe,” here’s another reason to get excited for the forthcoming album. “Bull’s Eye” was directly inspired by the Occupy movement,” says bandleader and multi-instrumentalist Pierre Chrétien. “The bull in the song refers to the Charging Bull on Wall Street, the iconic symbol of unbridled capitalism. The lyrics tell the rest of the story.” The heavy afro funk workout is available for free download, and is streaming below.

Resistance is released 4th September 2015 on Strut (on Do Right in Canada). Pre-orders are available now at online retail and the Strut Store.