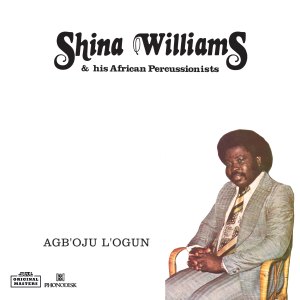 Shina Williams’ monster Nigerian disco anthem ‘Agboju Logun’ is out now on Strut featuring original artwork and all musicians’ credits and is fully remastered by The Carvery. The 12″ reissue pairs the rare original album version (released on Phonodisk Nigeria) with the more sparse 12” remix which surfaced later internationally on Earthworks. This is the third release on STRUT’S new Original Masters Series.

Back in 1979 when ‘Agboju Logun’ first appeared on his ‘African Dances’ LP, Williams knew well that the track was breaking new ground. “I want to show the whole wide world that Africa is alive with modern musicians to reckon with anywhere,” he stated. Now an accepted Afro disco classic of its time, ‘Agboju Logun’ did indeed bring together the cream of Nigeria’s players as a one-off supergroup in one inspired session. As a long-standing and well respected highlife musician and vocalist, Williams called in the ‘A’ list: Tunde Martins from Afro Collective played bass guitar, the brilliant Biddy Wright (player on albums by Lijadu Sisters, Blo and many more) contributed the famous synth lines and handled production, Fred Fisher was on trombone and Saliu Alabi played talking drum.

Enjoying limited success upon its release in Nigeria, ‘African Dances’ nevertheless gained some international attention when Earthworks’ Jumbo Van Renan licensed two tracks from it for an international 12” single release in 1984, remixing ‘Agboju Logun’ in a more stripped back mix for dancefloors. However, it was the period following Fela Kuti’s death in the late ‘90s that truly ignited interest in archive African grooves for a new internet generation. Strut’s first ‘Nigeria 70’ compilation featured the track in 2000 and it has been a staple in DJs’ crates ever since.