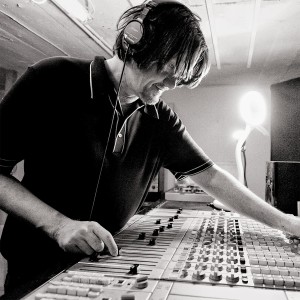 Here’s another taste of the upcoming Orlando Julius & Heliocentrics collaborative album, and what a monster it is! Hailing from Nigeria and London respectively, Julius and the Heliocentrics (lead by drummer Malcolm Catto) have a unique perspective on American soul music. Their take on a James Brown cut from the Popcorn album keeps the playing tight enough for the Godfather of Soul, while adding a new feel all their own.

The Jaiyede Afro album is out September 8th, and can be pre-ordered now on iTunes, with the track “Buje Buje” available instantly. CDs and limited 180 gram LPs are also available for pre-order from the Strut store.

Jake Ferguson of The Heliocentrics on “In The Middle:”
“We’ve all been big fans of James Brown since we’ve been involved in music and have played ‘In The Middle’ regularly on our live tours. It felt like a natural fit for the Orlando project, particularly as we have added an Afro swing to the track. We first played the track with Orlando at a London gig last year and he got into it in the studio straight away – his sax solo here was the very first take. James Brown and his band loved Orlando when they saw him play in Ibadan back in the ‘60s and the two of them met up and talked at J.B.’s hotel. So, for lots of reasons, this felt like a natural one to include.”