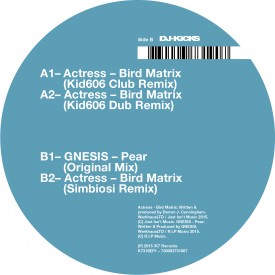 The exclusive Actress track “Bird Matrix,” from the UK producer’s 2015 DJ-Kicks mix, has been remixed for the latest in the DJ-Kicks remix series. The single includes both a “Club” and “Dub” remix from West Coast stalwart Kid606. Simbiosi, signed to Actress’ own Werk Discs label, also provides a take on the track. Filling out the release is the full album mix of another DJ-Kicks exclusive track, “Pear,” from Werk Discs affiliate GNESIS. Actress’ DJ-Kicks EP will be released on October 30th 2015.