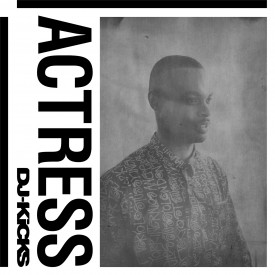 British techno-related visionary Actress joins the DJ-Kicks series this May with a singular hour-long set, following his acclaimed fourth full-length effort, Ghettoville, a recent re-release of his debut LP Hazyville, and a limited-edition black label project Xoul on his own Werkdiscs label.

For Actress (aka Darren Cunningham), the process of selecting tracks was fraught with meaning on a number of levels. “When I’m selecting music I’m not always thinking about the music alone,” Cunningham explains. “I’m thinking about the names of the artists, tracks, and labels, and what they mean to me. I often base my tracklisting purely on how well the track titles work together in a poetic sense.”

“I’ve tried to keep space between tracks, allowing them to speak,” he continues. “I tried not to force BPM shifts and to let the programming remain choppy and quick.”

Of course, the DJ-Kicks wouldn’t be complete without an exclusive production from the author himself. “Bird Matrix,” a track he made just after he finished writing Ghettoville. “My studio was going through a transition, so I was testing all the equipment, and that was one of the first tunes that came out of those experiments,” he explains. It’s a fittingly exploratory tune for a mix that balances traditional functionality with dance music’s cutting edge.

Actress’ DJ-Kicks, the 49th entry in the series, will be out May 1st (May 4th UK, May 5th US) on CD, LP and digital. Pre-orders are available now on iTunes and signed copies via Recordstore.co.uk.