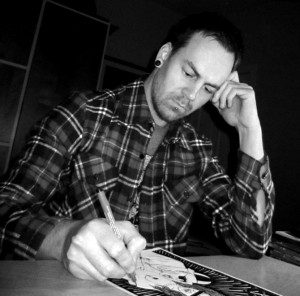 Our second foray into the incredible catalog of Chicago’s Dance Mania Records focuses specifically on the hyper-sexualized “Ghetto House” strain of dance music pioneered by the label. The ‘Ghetto Madness’ collection features striking cover art from artist James Wilson, meshing perfectly with the raw quality of the music. We sat down recently with James to talk about his initial exposure to house music, his artistic influences, and the ways in which he creates such incredible artwork.

Strut: You illustrated a piece on DJ Funk for Crack Magazine earlier this year. Before that, and being approached to work on art for Dance Mania: Ghetto Madness, was Chicago House or Ghetto House music that you were already listening to? Do you have a history of listening to dance music?

James Wilson: Before the DJ Funk piece and this Dance Mania project I had no idea what Ghetto House music was. I started listening to dance music as an adolescent, stuff like the Chemical Brothers and the Prodigy. It was pretty much all down to Wipeout 2097 on the Playstation that informed me of that style of music, other stuff like Orbital and Underworld. I started playing guitar and listening to heavy music after and lost touch with dance music for a few years but I listen to house music quite regularly now. 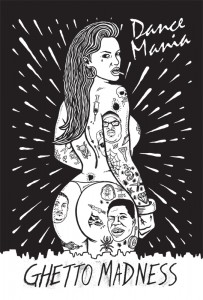 Both the cover and insert poster for Ghetto Madness are explicitly sexual, which is consistent with the lyrics of many of the records. Were there other ways in which the musical content influenced the way in you approached the artwork?

Ghetto House to me is very raw and stripped back so I wanted the artwork to reflect that. I was happy with how my DJ Funk piece had turned out previously and wanted to keep a similar feel. The Dance Mania artwork had to look even bolder which was why I decided to keep it black and white with strong thick outlines and hand scrawled text.

What are your tools for the cover illustration and poster? Are you working primarily with pen and paper?

I sketched out the artwork in pencil and then completed the ink work with my trusty tablet. I tend to work this way for most projects now as sketching by hand gives me a little more expression and the digital element allows more room to edit. 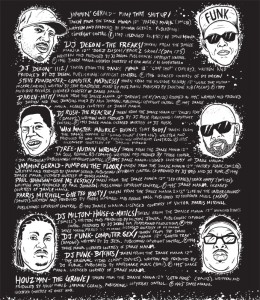 Comic books, musicians, and action movies seem to be common themes and subject matter in your work, and all tend to feature larger than life personalities and portrayals. Do you find art most interesting when it is an exaggeration?

I see so much amazing artwork every day, mainly through Instagram and Behance and it’s all in varying styles and media. I think the work I appreciate and find most interesting is art that has been produced with passion. I like artists that have a recognisable style and that also translates something about the artist, it adds that element of intrigue.

The poster insert for Ghetto Madness features several of the artists’ faces as tattoos. Do you have tattoos, and if so, do you design / illustrate them yourself?

I don’t have any tattoos although I’d like to have a go at designing some. I follow a few tattoo artists through social media so that was probably an influence. Mainly I wanted the girl to look like a badass and thought it could be an interesting way of involving the DJ’s on the poster.