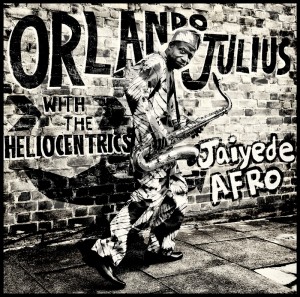 This fall, we’re extremely proud to announce the first ever internationally released new studio album by one of the all-time legends of Nigerian music, Orlando Julius, backed by the incredibly versatile London outfit The Heliocentrics.

On Jaiyede Afro, Julius takes us back to his roots, revisiting several compositions from his early years which have never previously been recorded. The album was recorded at the Heliocentrics’ fully analogue studio in North London. Like their their memorable collaborations with Mulatu Astatke and Lloyd Miller, the band takes Orlando’s sound into new, progressive directions, retaining the raw grit of his early work and adding psychedelic touches and adventurous new arrangements.

Jaiyede Afro is released September 9th on CD, 2xLP and digital formats. The physical formats feature new photos from the recording sessions by Alexis Maryon and track by track interview with Orlando Julius and The Heliocentrics. The release will be supported by a full European touring schedule.

Our vinyl-only re-issue of Julius’ classic album Super Afro Soul is available now in the Strut Store. Stream “Efoye So” below.