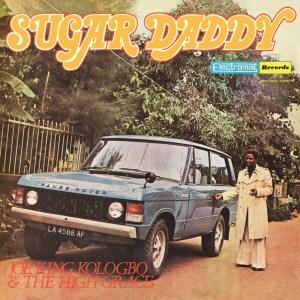 If that right there is enough to let you know that you’ll be needing each of these classic LPs, we’re offering a subscription option which guarantees a copy of each of the four 1LP Original Masters releases we have planned for 2017. Each one is a new pressing of an extremely rare crate essential, so a subscription means you’ll have some great music to look forward to!
*Note, if you’ve already pre-ordered the Joe King Kologbo album and would like to subscribe to the full series, please email bandcamp@k7.com

Forced to flee Nigeria when the Biafran War broke out in 1967, Kologbo spent the late 60s performing with various outfits in Ghana before returning to Lagos in 1971 and playing with Fela Kuti’s Africa 70 and Fela’s wider circle of musicians. By the time he recorded the ‘Sugar Daddy’ LP for the tiny Electromat label in 1980, he was one of the older musicians on the circuit.

“Since he was based in the East during his early days, he was not as well known nationally as some of the other highlife players of the time,” says Oghene Kologbo, “so it’s nice that this album is coming out again. It brings back good memories. That Range Rover on the cover – that is Fela’s!”

Joe King Kologbo’s Sugar Daddy is released 10th February 2017 in its original artwork and features new interviews with Oghene Kologbo and Sonny Akpan of The Funkees. Pre-orders are available now. An edited version of the 15-minute title track is streaming below.