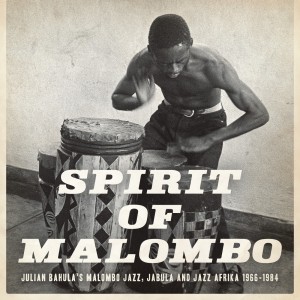 Like Fela Kuti and other eminent international figures of African music, South Africa’s Julian Bahula created a unique synthesis of western popular music and the traditional music of his home country, spreading his culture to an international audience as well as creating awareness for political issues affecting his homeland. In contrast to Kuti however, Bahula’s primary musical vehicle is jazz, and his story remains largely untold. Our Spirit of Malombo collection sheds light on a visionary musician, a prolific creator, and a tireless advocate for equality in South Africa.

In the early 60s, Bahula introduced indigenous malombo drums alongside guitar and flute to create a strong new cultural jazz fusion. Through various line-ups and name changes, Bahula had established himself by the end of the decade as the leader of South Africa’s foremost afro-centric jazz groups.

As the pressure of apartheid started to bear down, Julian Bahula escaped to political exile in the UK, where he formed a new afro super-group, Jabula, through which malombo music was transformed into a vehicle that could take a powerful political message from South Africa to audiences in Europe and across the world. The band worked closely and selflessly with the exiled ANC, the Anti-Apartheid Movement and other anti-apartheid organisations to help spread political awareness.

In ’83, Bahula and his wife Liza set up the first concert in the UK to raise awareness for Nelson Mandela, ‘African Sounds’, an event that helped to kick-start the international pressure that would lead to Mandela’s release in 1990. The Specials’ Jerry Dammers was there and was inspired by Jabula’s track ‘Mandela’ to write the huge hit for The Special AKA, ‘Nelson Mandela’.

Spirit Of Malombo documents Bahula’s incredible musical journey from 1966 to 1984 for the first time. Package includes rare photos, poster artwork and memorabilia with extensive sleeve notes from author Francis Gooding. The cover features a still from leading South African photographer, Ernest Cole. The album is available on iTunes, Amazon, and the Strut Store.