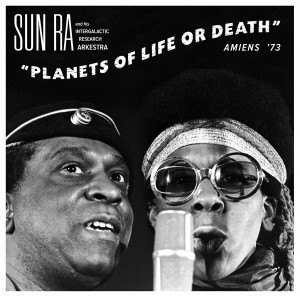 In celebration of Record Store Day 2015, Strut and Art Yard join forces once more for the first release anywhere of a live Sun Ra performance from Amiens, France in 1973, Planets Of Life Or Death. Recorded direct from the soundboard and mastered from first generation reel to reel, the title is exclusively available for Record Store Day 2015.

Sun Ra and his Arkestra had just completed a residency at the legendary Gibus in Paris in October before traveling to Amiens for a visceral Sunday afternoon concert. “Sun Ra’s use of the Arkestra as his instrument in an onslaught of sound, colour and movement stimulated and even shocked the senses and the shakras of audience participants onto a higher plane of spirit consciousness,” explains the Arkestra’s Knoel Scott.

On Side 1, the session kicks off with the theatrical overture, ‘Enlightenment’ as Sun Ra and vocalist June Tyson invite the audience to “be of our space world.” Ra then moves into a rare instrumental version of ‘Love In Outer Space,’ transforming the perennial Arkestra classic into a raw, ritualistic experience.

Side 2 of the album opens with the glistening ‘Lights On A Satellite’ led by the spiritual tenor sax of John Gilmore. Closing track, the epic, chaotic, anxious ‘Discipline 27-II / What Planet Is This’ features Sun Ra and June Tyson take a thinly veiled psychedelic swipe at life on earth: “If this is a planet of life, why do people die here?”

Stream a track from the album below. Information on participating stores for RSD 2015 is available here.