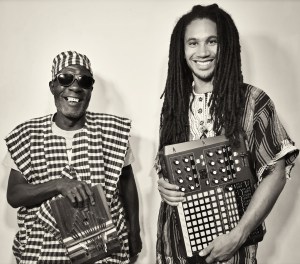 The project was spawned after Boima happened upon an online video of one of Sorie’s original tracks. “Sorie Kondi is a blind musician with a will to thrive like no person I have met before,” explains Boima. “My work with him began with a YouTube link. I spotted the video for his track ‘Without Money No Family’ and was struck by his beautiful vocals and socially-conscious lyrics. These incredible melodies he was playing on his namesake thumb piano (the kondi) sealed the deal: I immediately decided to remix it.” 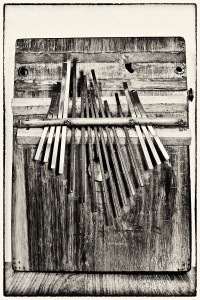 magazine. As a result, Sorie’s manager in Freetown reached out to Boima and, after a successful Kickstarter campaign, Sorie travelled to America for the first time for a five date tour. During the trip he and Boima worked on new recordings which form the nucleus of the debut Kondi Band album ‘Belle Wahalah.’

“This project forges a direct link between techno born in the black cities of the American Mid-West, where I grew up, and roots African music,” Boima continues. “Sorie Kondi may be playing an acoustic folk instrument from Sierra Leone, but he thinks about music as if he were a techno producer. The dance-friendly pulse of his cajon drum, the spiraling melody lines from the thumb piano and his incredible vocals hold it all together.” It’s acoustic dance music that creates a sound as full and dynamic as any club track and, through Boima’s intricate production, the album subtly and skillfully integrates contemporary electronic sounds, keeping the simplicity and space in Sorie’s music.

The first EP from the project is built around Sorie’s personal and uncompromising lyrics on ‘Belle Wahalah’, a song that uses belly pain as a metaphor for poverty, hunger and lack of financial opportunity. Mixes come from South London-based producer Hagan and the “father of Ancestral Soul”, Boddhi Satva. The release also features another simmering Kondi band original, ‘Yeanoh (Powe Handa Blingabe)’ which translates as ‘what’s up / what’s occurring’?

The ‘Belle Wahalah’ EP is out today on digital formats. A vinyl 12″ is due 27th May. A full-length album is in the works for September 2016. Hear the EP title track ‘Belle Wahalah’ below.