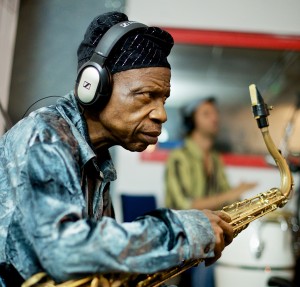 In a behind-the-scenes look into the recording studio, The Heliocentrics and Orlando Julius talk about their collaborative album Jaiyede Afro. Malcolm Catto, the drummer and leader of The Heliocentrics mentions his desire to bring a psychedelic edge to the sessions, in the manner of some of his favorite African recordings by groups like the Psychedelic Aliens and others. Orlando Julius also gives the background on a few of his songs.

The Jaiyede Afro album is out September 8th, and can be ordered now on iTunes, with the track “Buje Buje” available instantly. CDs and limited 180 gram LPs are also available for pre-order from the Strut store.